Carl Burnett. I met Carl in 1964. Somebody told me about a guy that was selling Ford stuff out of his back yard. I drove my ’56 Ford station wagon to his home out on Rolando Knolls drive and bought a ’27 T roadster bucket ($75) and ‘A’ frame ($25). Thoughout the build of that car and the ensuing years we became pretty good friends.

He parlayed that backyard operation he called “Hot Rod Haven” into a large modern store on Poplar St.  He called that business “Antique Automotive.”  An addition later expanded his space about 4 times with a car storage garage that held about 40 cars. All this happened between 1964 and 1968.

You may have noticed I qualified our relationship a little. Yes Carl was a fellow hot rodder and friend but he was also a businessman. This was the heyday….the roaring 20’s of hot rodding and he was in the middle of it…buying and selling. Everybody complained his prices were too high but he had it and you needed it. Everyone complained but everyone admitted they could depend on Carl to have the part or get it. There was only one competitor selling old parts in the San Diego area. His name was Ferris Rand in Escondido. All his stuff was outside and so were his pigeons.

Carl had a the eye of a perfectionist collector, the shrewd business acumen of a middle eastern rug dealer and was in the right place at the right time. He brought our hot rodding community the best and the most. Carl’s contribution to San Diego hot rodding was immeasurable.

The picture shows Carl’s Antique Automotive on Poplar St. The building on the right was the first built about 1964. The larger garage on the left was added about 1966. The door shown on the addition is the first of two. The second is at the far west (left) end of the building not visible. This picture was taken in the Fall of 1970. 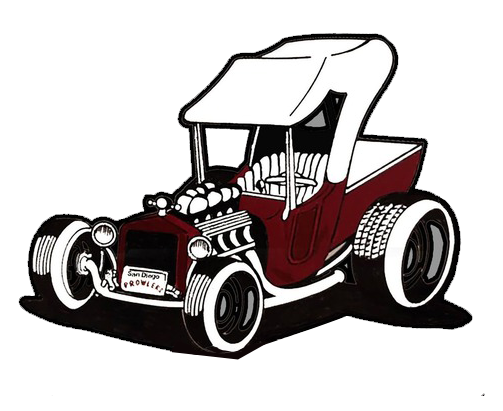